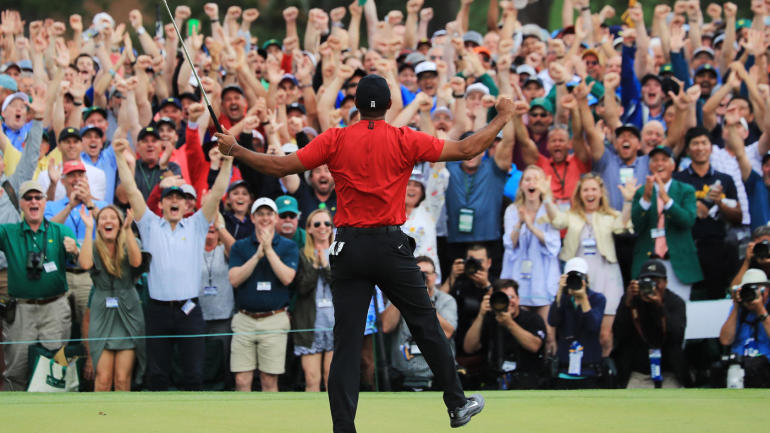 One month ago we posted an article noting that having the Players Championship back in front of the 4 Majors reset the tone for predicting the upcoming season. Rory took down TPC Sawgrass against the toughest field of the year and there was no reason to look elsewhere. He was destined to finish off his personal Grand Slam at Augusta National and glide through the season on his way to The Open Championship back on his home soil.
But a funny thing happened on the way to Royal Portrush.

It’s too late to recap, yet again, what Tiger achieved last Sunday. But it’s not too late to have fun predicting the impact.

Mock Neck’s.
NIKE backed away from the collared shirt last year when we began seeing those blade shirts and they were pretty cool. The Mock neck is a step further. And, a step too far likely. Recycling fashion is a guarantee and the return of pleats can’t be far away, but we must remember that these shirts are destined for the less-chiseled physiques of us average players. But the mock necks are back none the less.

Tiger 2.0
This is different, because the path is different. His first Tour of greatness was planned and well executed. This version is a bonus and came from redemption, not expectation. That’s going to make this version of Tiger more appreciative and, ultimately, relatable. We’ll have more smiles and hugs and thank you’s this time around. It’ll be fun because it’ll be different.

Tiger’s peers
He beat them at Augusta and they were there to smile and share in his celebration. But his one and only Major comeback is done and he his firmly on the radar of all his pals on TOUR. They had him in a different file before last week – his great career deserved some reverence and his attempted return to Major victories was worth rooting for. That is now done and this group of thoroughbreds want nothing more than to take him down. Tiger is about to learn how talented and deep his current peer group really is.

Growth of the game
He did it before. Tiger became a worldwide hero and the game of golf benefited. This time it could be better. He was on a pedestal last time around. Unmatched and worthy of our awe. But that lacked relatability. His image is softer now and Tiger 2.0 might just make an ever bigger impact in growing the game this time around.

2019
The Open-for-the-season signs are not yet up on the front gates on most Northern courses and the table is already set for this to be an incredible year for golf. We can’t wait to get the next Major and the next and the next and then the Playoffs…. Let’s enjoy this ride that Tiger has us all on since most of us didn’t think we’d ever be on it again.