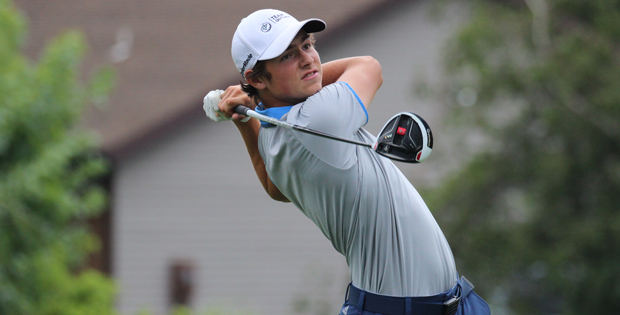 Very few of us can ever say we are the absolute best at something; it takes a rare skill level along with a relentless work ethic. For those who make it, they’ll be the first to tell you it isn’t easy. After years of hard work, Matt Anderson, a long time ClubLink Academy student, can finally call himself the best.

Alf Callowhill has been Anderson’s instructor for roughly eight years, and couldn’t be more pleased with the progress he has seen in his student.

“When I first worked with Matt, I could tell that he was a golfer. Although his technique was pretty unique, he loved trying to hit different kinds of shots,” said Callowhill, who along with being Anderson’s instructor, works as a golf professional at RattleSnake Point Golf Club. “Even at 10 or 11 years old he was impressive out of the bunker - he could hit high spinning shots with ease. Initially we made some changes to his grip and his downswing, and as he developed his technical skills, we were able to spend more time on strategy.”

While Anderson has worked hard to improve both his technical skills and strategy, Callowhill describes Anderson’s biggest improvement as his “emotional awareness on the course.”

“Over the past two years the biggest change I've seen is his ability to make a game-plan for each round and then stick to it,” said Callowhill. “He's no longer letting emotions dictate his strategy and I think that's why he's been able to be so consistent and keep himself in contention.”

Another big change that helped catapult Anderson’s game was his confidence boost. Callowhill always knew that his student had what it took to be great – it just took Anderson some time to believe it too.

With a fantastic junior career coming to a close, Anderson is planning on taking his game to the NCAA level. Anderson has committed to the University of San Francisco and will be looking to dominate the collegiate level, much like he did in the Canadian junior golf circuit. Callowhill doesn’t see his student slowing down any time soon.

“Matt has plans to see how far he can take it,” said Callowhill. “A lot of kids go off on their own and forget about their golf careers. Matt has always been able to balance his golf and social life well, and I know he has aspirations for more with golf.”

With Anderson off to school, Callowhill will be looking to help his other students reach their potential, much like he did with Anderson.

“When a student works with the same coach from a young age, the chemistry builds and both people know what their desires are,” stated Callowhill. “At our ClubLink Academies we work closely with our students to make sure their practice and habits are in line with their dreams.”

Anderson is a wonderful example of how dedication and hard work can flourish inside the highly structured teaching worlds at Glen Abbey and RattleSnake Point. It will be exciting to see which ClubLink Academy students follow in Anderson’s footsteps on their path to becoming the next #1 junior golfer in Canada.