The Shag Bag - The Hug Seen 'Round the World 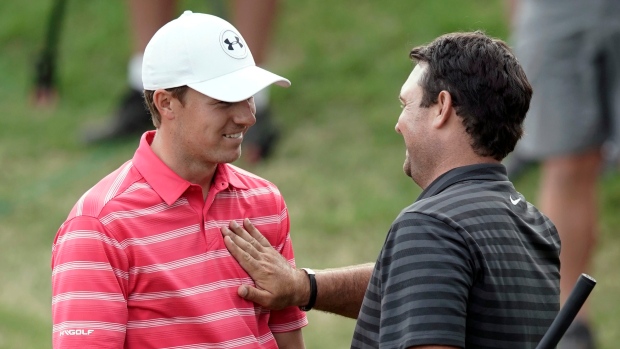 The Hug Seen ‘Round the World

The stars aligned at Torrey Pines for Saturday’s third round, giving golf fans the pairing they’ve been awaiting since the Ryder Cup: that of Jordan Spieth and Patrick Reed. The two players hadn’t played together since their falling out in Paris, when Reed accused Spieth of not wanting to play alongside him in the biennial event despite the duo’s past success. So, when the young guns arrived for their tee time on Saturday, more than an hour before the day’s final pairing was scheduled to go off, the last thing fans thought they were going to see was the two guys hugging it out on the first tee. Nonetheless, that’s how it went down: Reed offered his fist to Spieth for a bump, but the Texan leaned in with open arms and the two embraced in front of hundreds of spectators.

The hug brought a huge smile to Reed’s face and got a warm reaction from the crowd. After the round, Spieth clarified that he and Reed had already buried the hatchet earlier this month and that he thought the hug would lighten the mood, given the circumstances: “We knew the cameras were on and we knew people were interested, so I just thought it would be kind of funny.” He’s right; it was pretty funny. Who knew the three-time major champion has such a good sense of humour?

The first 54 holes at the Web.com Bahamas Great Abaco Classic could not have gone better for Erik Compton. The double heart transplant recipient, who last had full PGA Tour status in 2016, shared a three-way lead with John Oda and Willy Wilcox heading into Wednesday’s final round. Compton stumbled early with a trio of bogeys in his first six holes, but still remained well within contention until the 8th hole when he made a disastrous quintuple-bogey 10 on the par 5. Here’s how it happened: after pulling his drive way left into some heavy bushes, Compton took an unplayable drop and then tried to hit a risky shot back into play with his hybrid. But the 39-year-old lost his footing in his downswing and hooked his ball out of bounds. He dropped a second ball from the same spot for his fifth shot, but it hit a tree and deflected into a row of hedges in front of him. Initially, Compton and his caddie couldn’t find it and the veteran could be overheard muttering on the broadcast, “I’m so confused right now. I’ve hit so many golf balls and I have no idea what’s happening.”

But Compton eventually located it, took another unplayable drop and hit a miraculous shot onto the green for his seventh. Unfortunately, he needed three putts to get his ball into the cup and walked off the hole with the double-digit score. Things only got worse from there for the journeyman, as Compton bogeyed each of the next three holes and added one more on the 15th to shoot an 83 and finish the tournament tied for 25th place.

We already knew that Kansas City Chiefs QB Patrick Mahomes has superhuman arm speed. After all, the kid threw 50 touchdowns this year in his first full season as a starter. But it turns out the 23-year-old has some tremendous clubhead speed as well, as evidenced from a video of Mahomes hitting balls at a Topgolf location last week. Look at that trajectory . . . is there anything the guy cannot do?

Trick shot artist Tania Tare tests if having the flagstick in the cup helps with this crafty chip.

Shank of the Week #1

For some players, all rough is U.S. Open length.

Shank of the Week #2