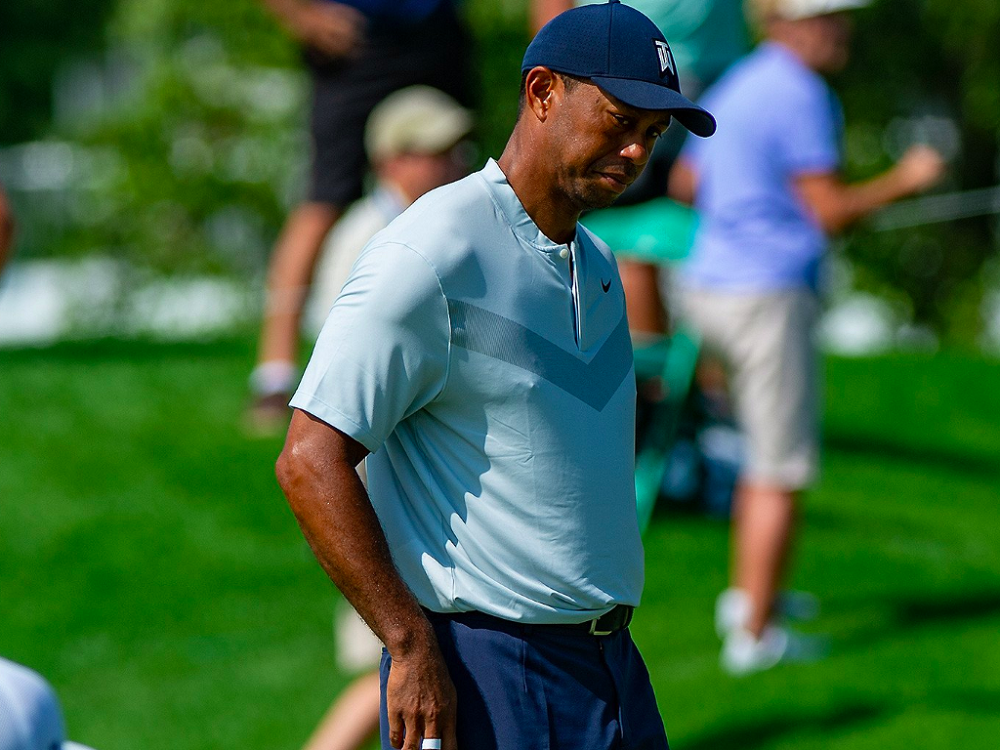 A Too Taut Tiger

Tiger Woods’s appearance at the Northern Trust Open last week went from worrisome to downright alarming in a hurry. The 43-year-old committed to playing in the first two events of the FedEx Cup Playoffs despite having played in only four events since May, which, in hindsight, probably wasn’t the best idea. Woods had to cut his practice round short after just nine holes on Wednesday, citing stiffness. Nevertheless, he played on Thursday and looked considerably looser, making the turn at even par, but faltered with three bogeys and a double on the back nine to post a 75. Woods would have started Friday’s round 13 shots behind leader Troy Merritt had he not withdrawn just hours before he was scheduled to tee off, blaming a strained oblique muscle. “I went for treatment early Friday morning, but unfortunately I’m still unable to compete,” the 15-time major champion explained in a statement. “I’d like to thank the New Jersey and New York fans for their support and remain hopeful I can compete next week at the BMW Championship.” Woods, who entered the week in 29th place in the FedEx Cup standings, is still in a good position to make a run at the $15 million payout if he can limber up in time for this week’s BMW Championship. If not, it will probably be the last we see of him until 2020.

In a strange sequence of events on Friday afternoon, Rory McIlroy was temporarily penalized two strokes on Liberty National’s 14th hole for touching the sand directly behind his ball in the greenside bunker. Trailing by only three strokes at the time, the Northern Irishman bent down to remove what he believed to be a small pebble behind his ball, which is now permitted thanks to the recent changes to rules 12.2a and 12.2b. But upon touching it, he realized the impediment was just a clump of sand and quickly removed his hand without moving it. McIlroy immediately notified a rules official, alleging that he had not improved his lie in any way. 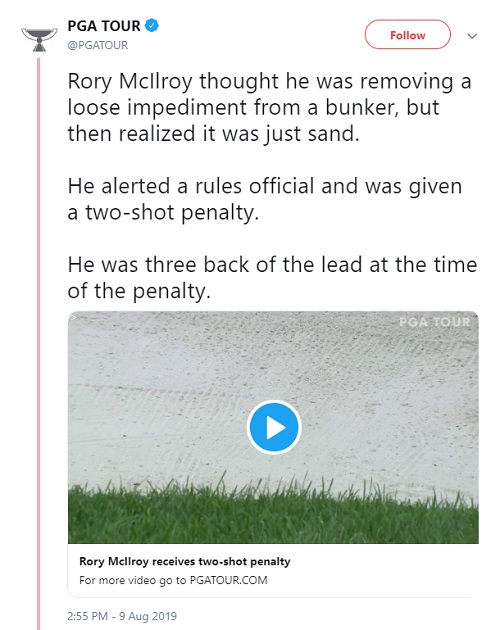 He was assessed the two strokes anyway after a lengthy but calm discussion and appeared completely unfazed by the penalty, getting up and down from the trap for a double bogey and then bouncing right back with a birdie on the very next hole: 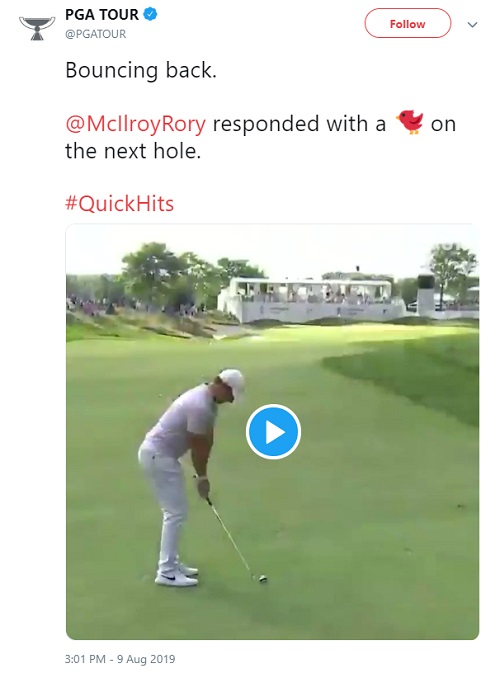 The PGA Tour reviewed the incident after the round and ultimately rescinded the penalty, agreeing that McIlroy’s limited actions did not constitute a breach of the rule. “In a way it came down to me,” McIlroy explained to the media after the round. “They said, ‘Are you comfortable telling us you didn’t improve your lie?’ I feel like I play the game with integrity, and I’m comfortable saying that I didn’t improve anything.”

Troy Merritt was nearly unstoppable through the first 27 holes of the Northern Trust Open. He began the week with an unblemished 9-under 62 to take the outright lead and then birdied his first two holes on Friday to increase that lead to three strokes. And then on the 6th hole, a gust of wind blew his errant putt into the hole. You read that right! Merritt’s ball came to a rest a good two inches from the cup, but somehow ended up in the cup anyway. Unfortunately, this is the only footage that exists of the bizarre sequence. Nonetheless, you can tell by Merritt’s astonished reaction that something truly bizarre just occurred. 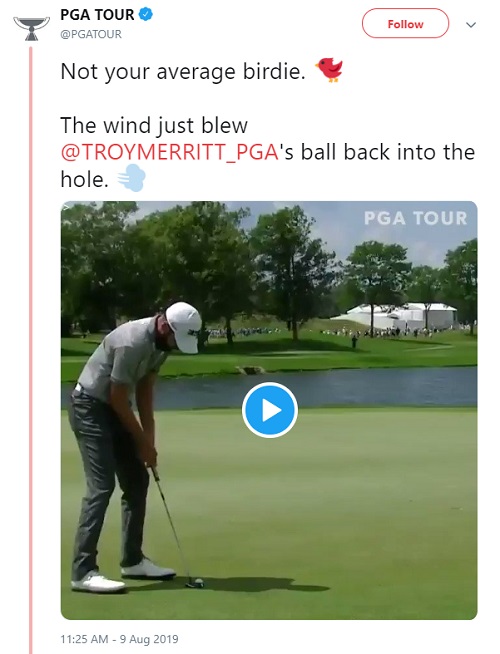 Patrick Reed was impressive at the Northern Trust, capturing his first win since breaking through at the Masters last year. But it was his caddy, Kessler Karain, who earned this week’s honours by going that extra mile in a few situations on Sunday to ensure that Reed came away with the victory. Karain made some excellent reads in the finale, although none were more hilarious than this one, where he laid down on the green with his chin touching the grass to get the best possible view of the putt: 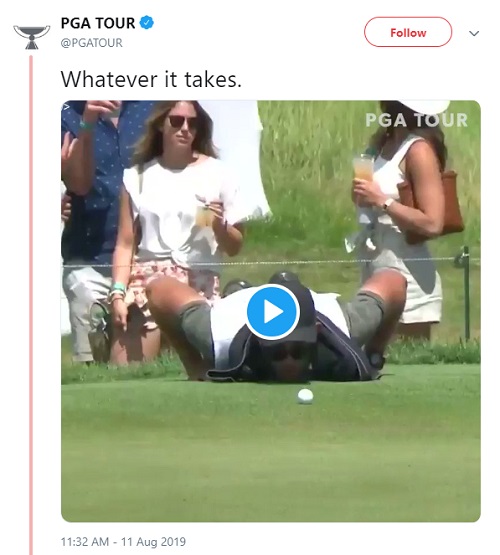 And then there was this moment a few holes later, when Karain, with his arms outstretched like wings, chased a gaggle of geese off of the fairway so Reed could hit his approach shot: 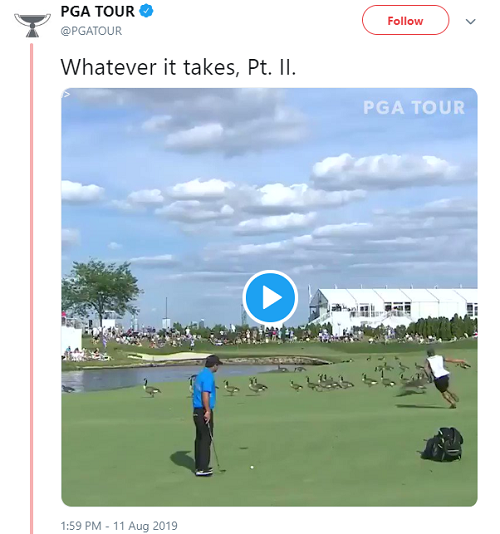 Karain took home $166, 500 dollars for his contributions throughout the week, and I don’t think anyone would argue that he didn’t deserve every single penny after a performance like that.

Why he thought it would be easier to tee off from a downhill sand lie rather than the patch of grass directly behind him is beyond us. Either way, enjoy: 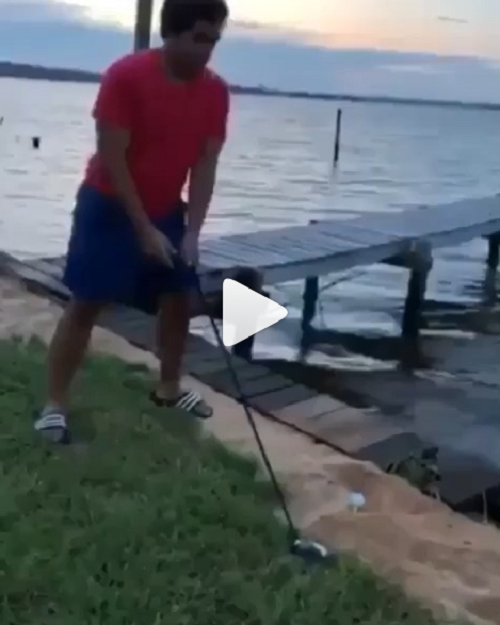 A few of the worlds best decided to see who could hit the best stinger during a practice round at Medinah Country Club prior to the 2019 BMW Championship: 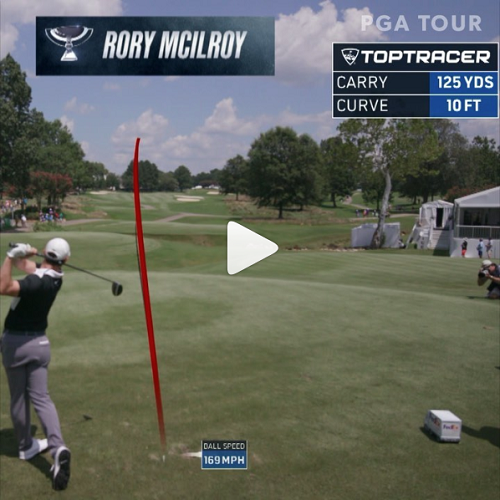