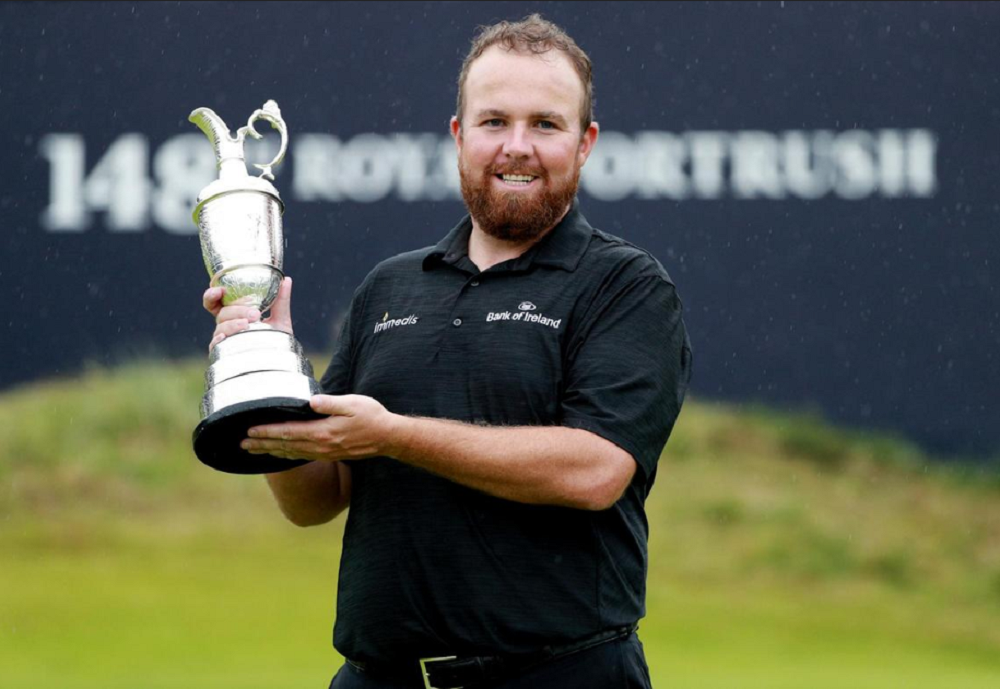 Shane Lowry was nothing shy of brilliant on Moving Day at the Open. With only one career PGA Tour win under his belt, the Irishman displayed nerves of steel as he took control of the tournament with an 8-under 63, the lowest round of the week. Lowry got things going with a birdie on the 3rd hole, his first of eight on the day, thank to this tremendous tee shot: 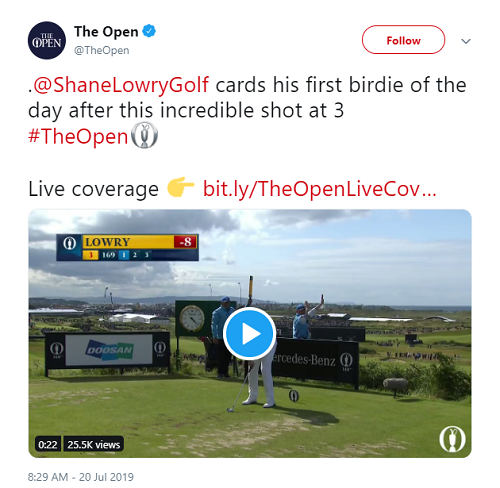 He made another on 5 and then took the outright lead on 9 with this remarkable approach shot from 177 yards that he converted with ease. 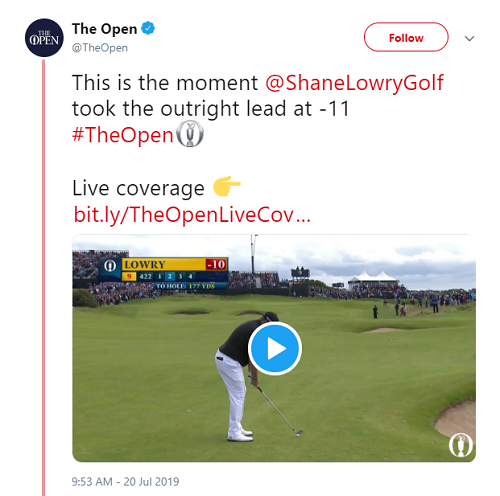 The floodgates then opened. Lowry made birdies on 10 and 12, and then three in a row beginning on the 15th hole to get to 16-under par for the week. A par on 18 gave Lowry a four-shot lead on the rest of the field and paved the way to the first major of his career, which he locked down on Sunday with a round of 72. 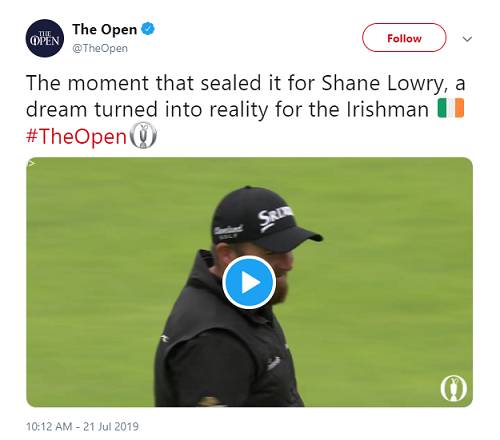 Rory McIlroy couldn’t have had two more dissimilar rounds at last week’s Open. On Thursday, the Northern Irishman played terribly in front of his home crowd. He made a quadruple bogey 8 on his opening hole, after his tee shot hopped out of bounds and broke a spectator’s phone. 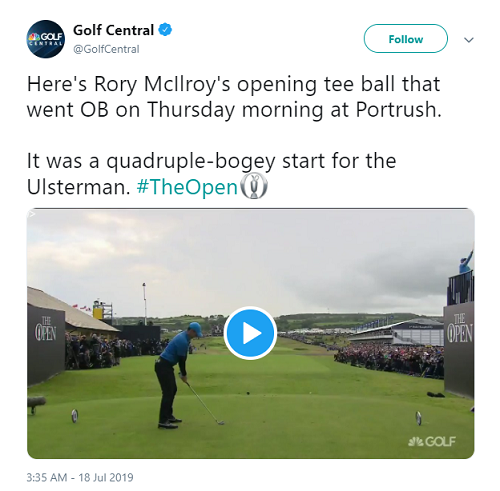 McIlroy struggled to right the ship after that, playing the next 14 holes at a respectable one-under par before imploding down the stretch with a double bogey on 16 and a triple bogey on 18. Those blunders added up to an 8-over 79; not exactly the start the 30-year-old was hoping for. But something changed overnight for McIlroy because he looked like a different person out there on Friday. Rory drained a monster birdie putt on the 3rd hole from outside of 35 feet to get one shot back, then drained another tricky one on the 7th hole to get back to 6-over par for the week and give himself a chance at catching the projected 1-over cutline. With determination in his eyes and local fans in attendance cheering at a fever pitch, the 2014 Open champion birdied the next three in a row, blistering his drives down Royal Portrush’s majestic fairways. A bogey hiccup on 13 brought McIlroy back to 4-over par, but he quickly recovered with birdies on 14 and 16 to get to 6-under on the day and only one shot back of the cutline.

Unfortunately, McIlroy made pars on his final two holes and came up short by just a single stroke. 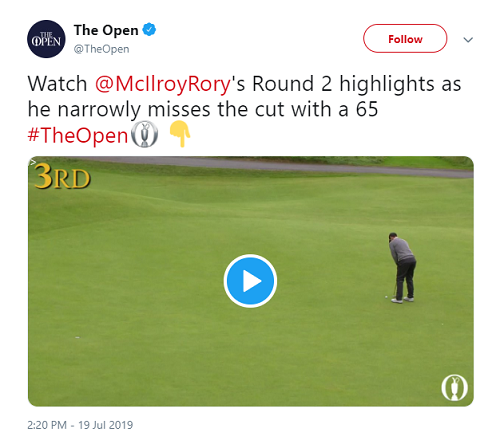 “As much as I came here at the start of the week saying I wanted to do it for me, by the end of the round there today I was doing it just as much for them,” McIlroy said after the round. “I wanted to be here for the weekend; selfishly, I wanted to feel that support for two more days. To play in front of those crowds and to feel that momentum and really dig in, it’s going to be a tough one to get over.”

David Duval had a horrendous week at the Open. The 47-year-old, who won the event in 2001 at Royal Lytham and St. Annes, finished the week in last place, 13 strokes back of the nearest competitor and 25 strokes off the cutline — and it was all due to one of the worst opening nines we’ve seen in recent memory. He actually birdied the first two holes and was 2-under through four before disaster struck with a quadruple bogey on 5, a bogey on 6 and an implausible nonuple bogey 14 on 7. Yes, you read that correctly: 9-over par on one hole!

Here’s how it went down: Duval air mailed his tee shot into some thick fescue and then hit a provisional shot into a similar patch of thick, gnarly grass. Although he was unable to locate his first ball, a marshal found what Duval believed to be his provisional. Duval played that second ball all the way up to the green until Zach Johnson’s caddie, Damon Green, pointed out that it wasn’t the same Titleist 2 that Duval had declared. As a result Duval was awarded an additional four penalty strokes on top of the two he accrued for losing his original tee shot—two strokes for a lost provisional plus two more for hitting the wrong ball—and was forced to return to the tee to hit his seventh shot! That shot also found the thick rough and he was only able to chop at the ball for his 8th, hitting it just a few yards in the process. Duval needed another six shots to finish the hole, although there was considerable confusion when tournament officials got their abacuses out to add up all of the strokes afterward. The R&A first reported that Duval made a 15 on the hole, then quickly changed it to a 13, then revised it again hours later when the committee realized that it had only docked him one stroke for hitting the wrong ball. Duval momentum’s continued to flounder after the hole, making bogies on 9, 10, 11, 15 and 16, as well as a triple bogey on 17 to finish with the day with a 91! “It was just one of those God-awful scenarios that happened today and I happened to be on the end of it,” a humbled Duval said after the round. “If you play, you post your score. Am I happy about that? Is there some embarrassment to it? I don’t know. But I teed off in the Open and I shot 91 today, so put it on the board.” 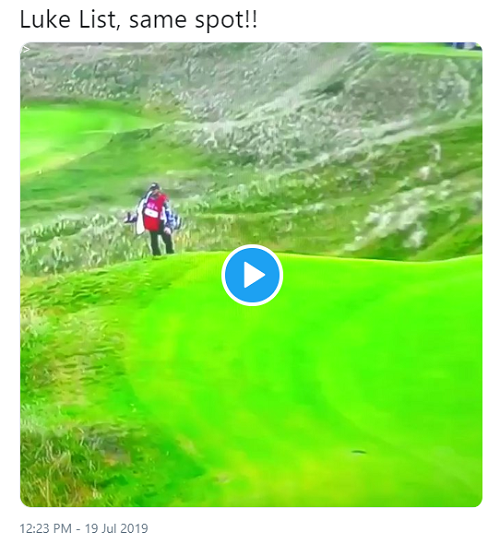 Reaction of the Week

Graeme McDowell didn’t take the news well when he learned that he took 12 seconds too long to find his ball on the 18th hole and would have to return to the tee to hit his third: 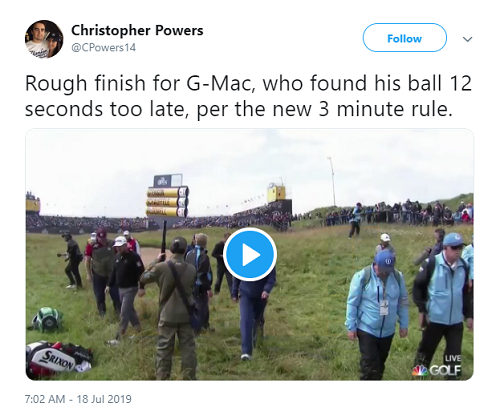 Watching the locals storm Royal Portrush’s 18th green to celebrate with Shane Lowry was one of the coolest things we’ve seen in a long time. 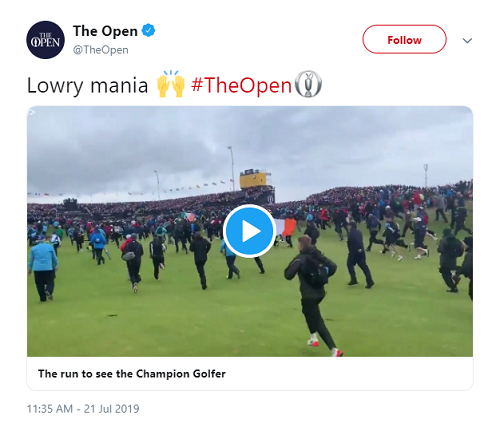 South Africa’s Dylan Frittelli, who earned the final spot into last week’s Open by winning the John Deere Classic the week before, was actually in contention for the first two rounds. Things didn’t go his way on the weekend but check out this crazy eagle he jarred on the 6th hole on Saturday to get to 6-under for the week. 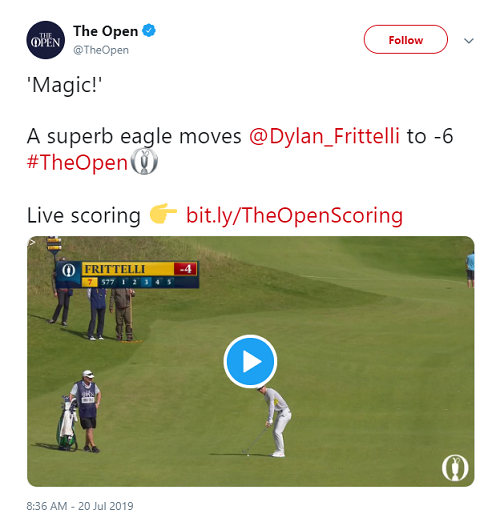