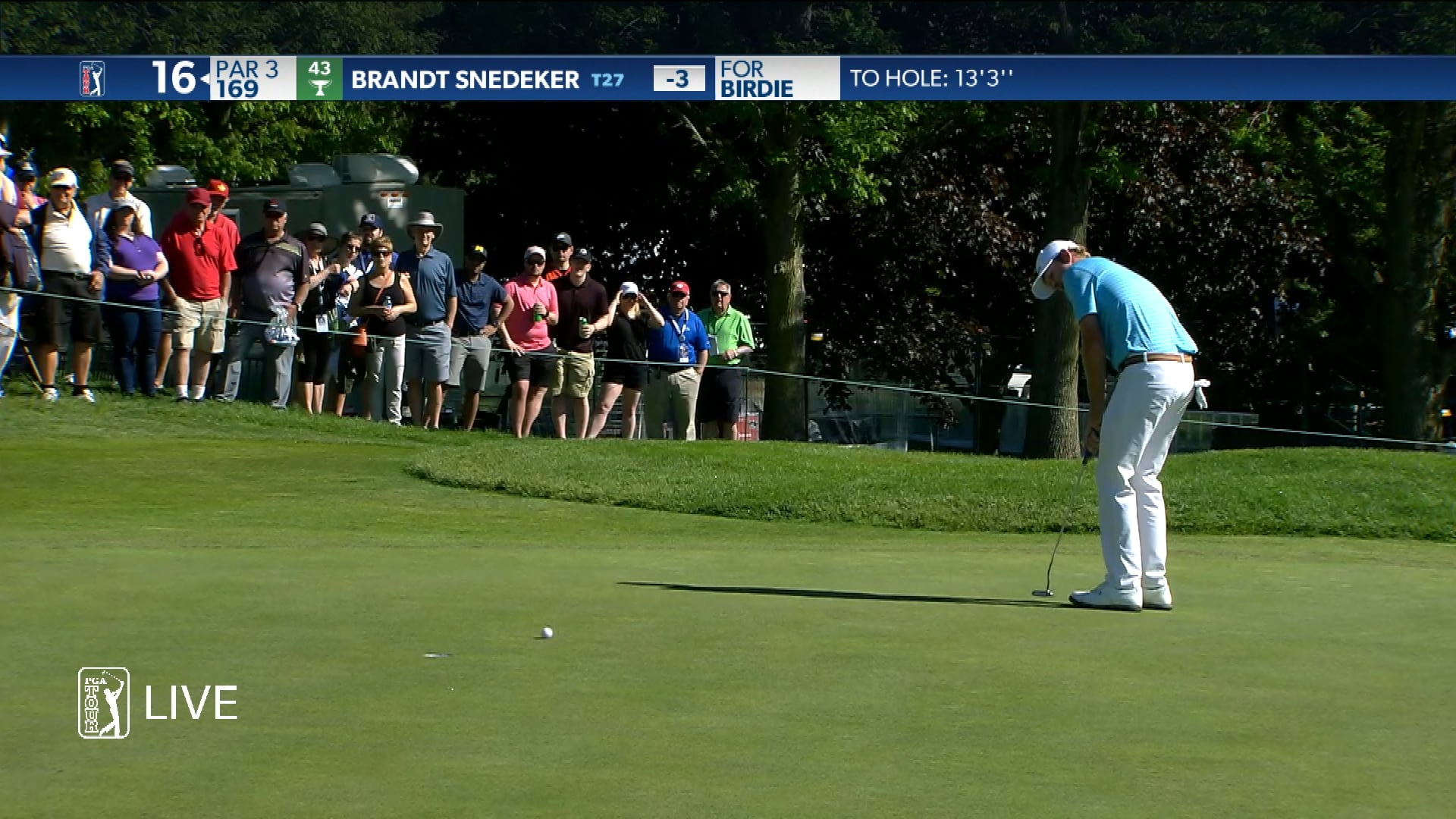 Brandt Snedeker didn’t get off to a particularly great start at the RBC Canadian Open, but he rebounded most spectacularly with an awe-inspiring second round at Hamilton Golf Club on Friday. The 38-year-old shot the low round of the day, a 10-under 60 that tied a Canadian Open single-day scoring record and vaulted him up the leaderboard from a tie for 58th into a tie for 3rd with Canadian Nick Taylor. Snedeker started on the back nine and was already four under par when he made the turn, but he didn’t catch fire until the 4th hole when he drained this eagle putt from just over 20 feet. 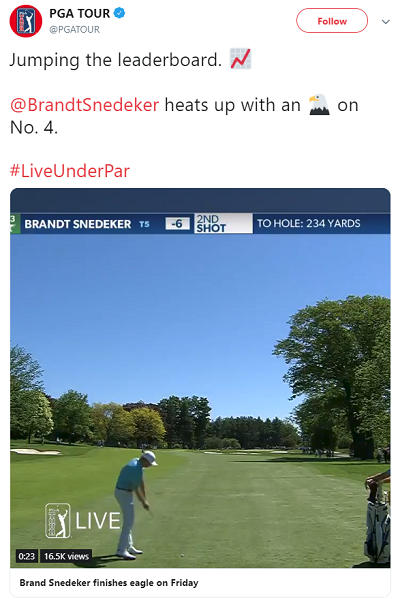 Snedeker then dropped another 20+ footer for birdie on the 5th and another birdie from 14 feet on the 6th to get to 9-under and put the rest of the field on notice. 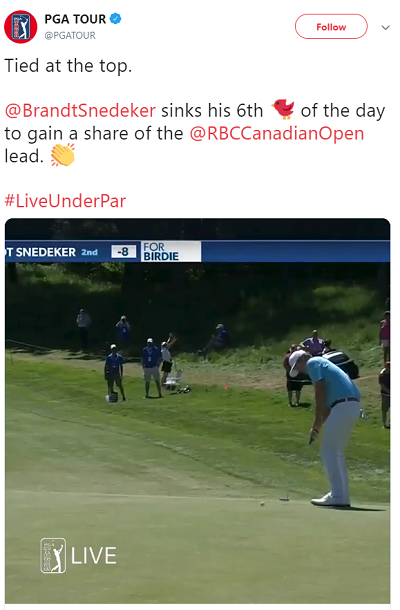 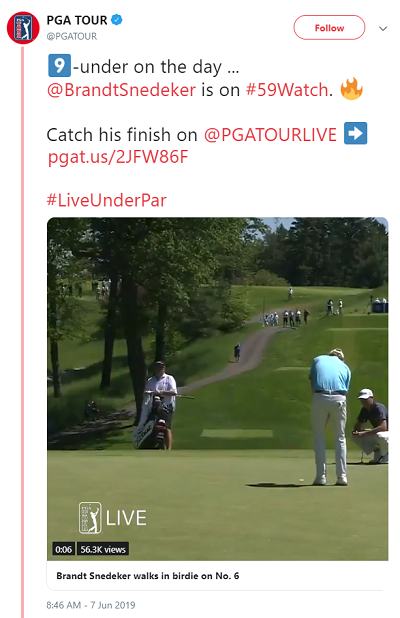 The 2013 RBC Canadian Open champ failed to hole his fairway shot on the final hole to shoot a 59, but he did stick it to just over five feet from the cup and easily made the putt for his eighth birdie of the round. 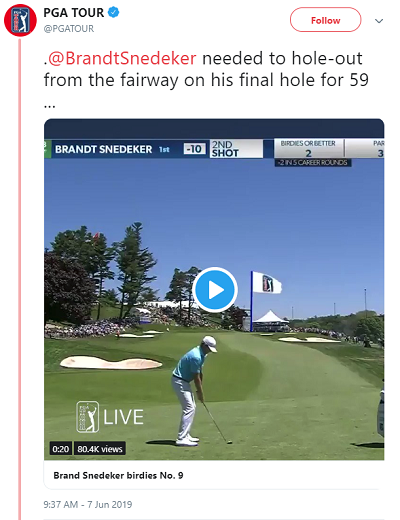 Had he holed out, he would have become just the second player in PGA Tour history to break 60 on two different occasions. Snedeker joined the elite 59-club last August at the Wyndham Championship; only Jim Furyk, who carded a 59 at the 2013 BMW Championship and a 58 at the 2016 Travelers Championship, has done it twice!

It was a great week for Canadian golf in Hamilton, with six of the 26 Canucks in the field making the cut and four playing their way into ties for 7th place or better through 36 holes. Adam Hadwin led the way with rounds of 65, 66, 67 and 70 to finish in sixth place, his best result at the tournament since tying for fourth in 2011.  Mackenzie Hughes also had an impressive showing, tying for 14th place with a score of 8-under par for the week. Thornhill’s Ben Silverman left his mark on the tournament on Friday with a blistering 9-under 61. His score matched Rory McIlroy’s for the second best round of the week and broke a record for the lowest one-day score ever posted by a Canadian in the history of the tournament. Unfortunately, Silverman couldn’t carry that momentum over to the weekend, closing the tournament out with a 72 and a 69 to finish in a tie for 20th. Nick Taylor, too, looked like he might become the first Canadian champion since Pat Fletcher in 1954 after opening the tournament with rounds of 64 and 65, but the B.C. native stumbled in his weekend rounds and finished for 27th. Rounding out the Canadian crew were Roger Sloan and Richard Jung, who finished in 56th and 69th place, respectively.

All of the Toys

FOX is pulling out all of the stops for its broadcast of this week’s U.S. Open at Pebble Beach. The network announced last week that it has laid 51 miles of multi-strand fiber optics on the premises and has installed more than 50 1080p high-dynamic cameras to bring you the most crystal-clear coverage possible. The network will also use a mobile tower camera and an aerial drone to relay live, overhead and unique-angled shots of the action and one of golf’s most iconic courses. That feed will be operated from and tethered to a boat anchored just off of the beach in Stillwater Cove. Moreover, a mixture of shot-tracing features and virtual graphics will enhance all 18 holes, with live Trackman technology on 9 of the tee boxes and FOX’s innovative FlightTrack graphics being used on the others. A hiccup or two may result from the implementation of all this camera technology, but we appreciate the efforts the network is taking to provide unprecedented shots of Pebble Beach and a top-notch viewing experience for those of us watching the tournament from our homes!

We say it all of the time: It doesn’t matter how you get to impact, provided your contact is solid. Despite the wonky back swing and leg action, this guy has a solid impact position and a decent follow through, which just goes to show you that there really isn’t one true way to swing a golf club. 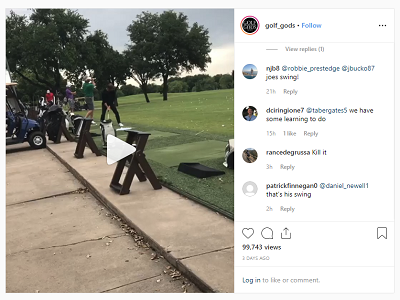 Unbelievable! How is this even possible? 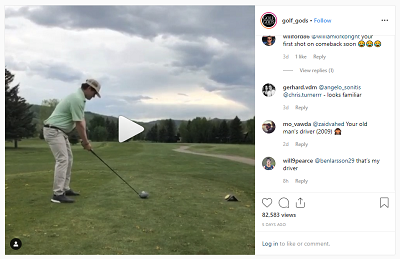 Raptors Moment of the Week

Even Rory McIlroy has caught a case of Raptors fever. Not surprising . . . it’s contagious! 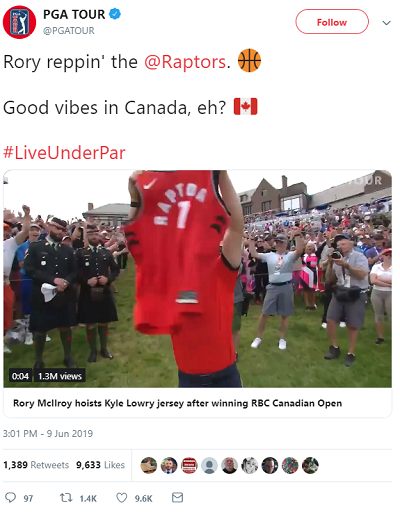 We realize that Rory McIlroy turned into a human fireball over the weekend and torched Hamilton Golf Club to lock down his first RBC Canadian Open title, but this 321-yard drive from Bubba Watson on the 5th hole on Saturday that curved more than 200 feet and finished less than 45 yards away from the pin was just otherworldly! Incredibly, he somehow managed to only make a par on the hole. 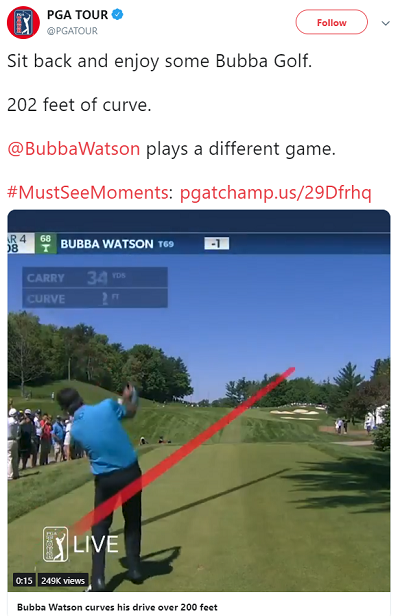