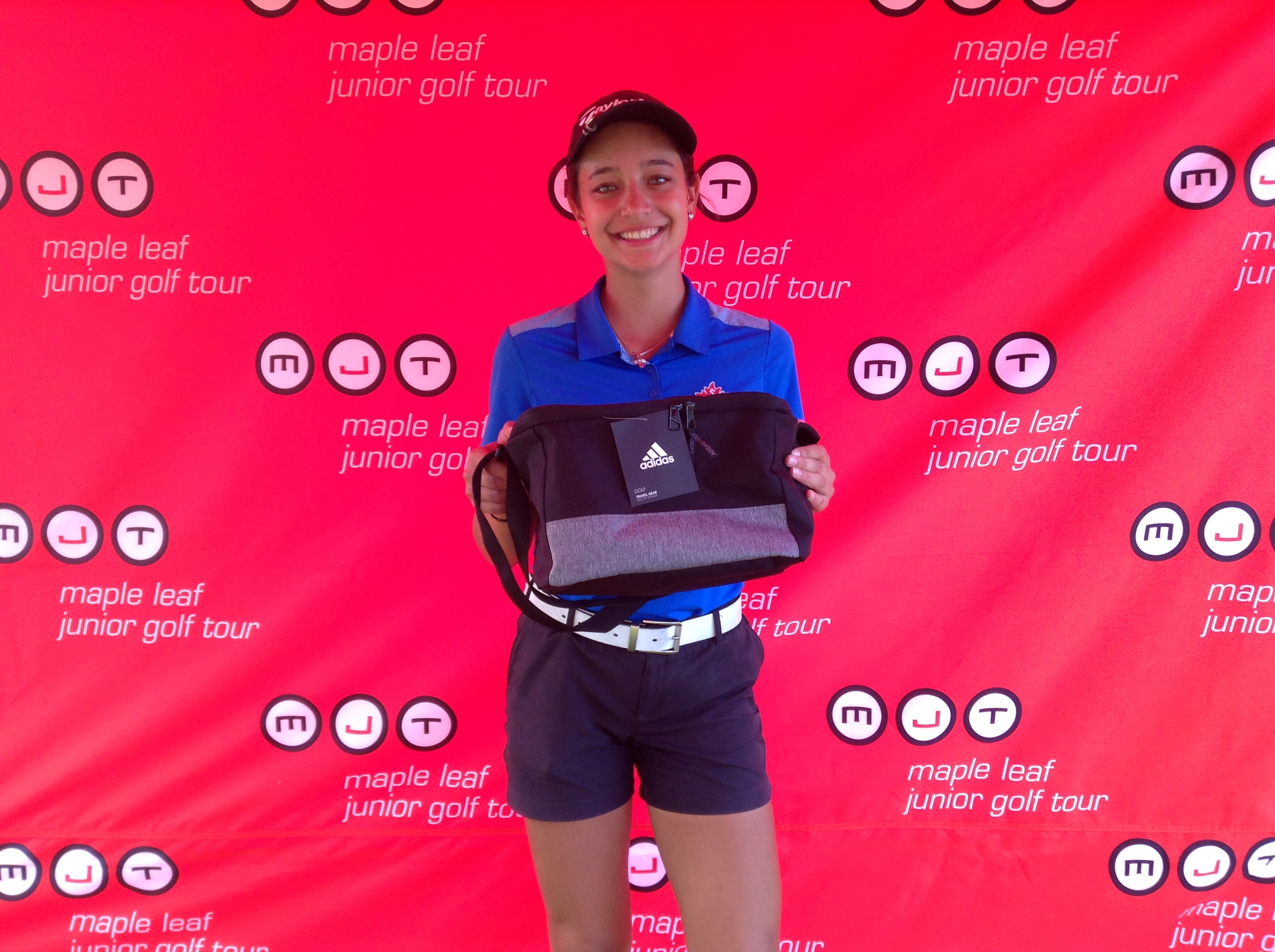 Burlington, ON – (July 6, 2020) -  The MJT Humber College PGM Classic at Hidden Lake Golf Club in Burlington, ON, played out in great weather over July 4 and 5, where a heavily wait-listed field competed in six divisions on Canada’s number one-played junior golf tour. Highlights of the Maple Leaf Junior Golf Tour event included a hole-in-one on the sixth hole for Kaitlyn Ellis, 14, of Oakville, ON, during her second round, a playoff in the Peewee Boys division, and fine scoring by the field of players, who were following strict health and safety protocols with no gatherings.

The MJT Girls 15-19 Division saw a three-way tie at the top of leaderboard  with a score of 75 after one day of play between 14-year old Alissa Xu, of Richmond Hill, ON, 16-year old Bo Brown, of Mississauga, ON, and 16-year old Alessandra Christine Nagayo, of Toronto, ON. With all three players grabbing the lead at one point, it was Xu who carded a 70 on the second day (145) to edge the field by one shot and win the title plus Low Overall Girls score. Xu, playing up a division, rejoins the MJT since her last event in 2018 and captures the victory.

Richmond Hill-resident Michelle Xing, 11, recorded rounds of 76 and 78 (154) to win the MJT Girls U15 title. Xing, who is playing her first year on the MJT, held onto her round one lead to win the division by two shots.

The MJT Junior Boys title and the Low Overall Boys score went to 17-year old Owen Gauder. The Toronto junior golfer carded rock-solid rounds of 72 and 73 (145) to capture his first win in his first career MJT event. “I played a practice round and worked on my driver,” commented Gauder. “I tried to focus mostly on my own game.”

Holding onto the title in the MJT Juvenile Boys Division was 16-year old Ryan Somerville, of Aurora, ON. Somerville acquired a three-shot lead after the first round and was able to build on that further during the first half of his second round. Struggling a bit coming down the stretch, Somerville had built enough of a cushion to win the division by three shots over three other players. “My putting was pretty good on the second day,” said Somerville, who finished the event with scores of 73 and 77 (150). “And my driving was pretty good both days.”

Burlington-native, Aiden Pavey, 13, took charge in the second round of the competition coming back from a one-shot deficit to win the MJT Bantam Boys title by five shots. Pavey struggled to find his groove during the first round shooting a 79 but got into the rhythm for round two firing a 73 (152). “I just tried to shoot my best,” commented Pavey. “I played my game and came out with the win.”

The MJT Peewee Boys Division witnessed a tie at the top of the leaderboard with a score of 148 between 11-year-old Markham, ON-player Dawson Lew, (73-75), and 10-year-old Aurora-player Eddie Gu, (72-76). Gu made short work in the playoff by winning the title with a birdie on the first playoff hole.

Full results of the event can be viewed here. The next Ontario stop will take place July 13 and 14 in Thornton, ON, for the MJT TaylorMade Junior Championship at Tangle Creek Golf and Country Club. More information can be found online at www.maplejt.com.

About Humber College PGM Program: Humber College’s Business Administration - Professional Golf Management program is a Recognized PGA of Canada program. Gain a business education, develop your golf game, and embark on a career you will love. Gain valuable experience and earn income during our two 6-month paid co-op terms. Our on-campus Golf Lab is a world-class golf performance training facility run by PGA Professionals. Our Golf Lab is equipped with three Simulator Rooms, a Golf Retail Shop, Golf Club Workshop, and 2000 square feet of putting surface. Our students have the opportunity to play on the Humber Hawks varsity golf team, the most decorated golf team in Canada. For more information please visit our website at business.humber.ca/golf.