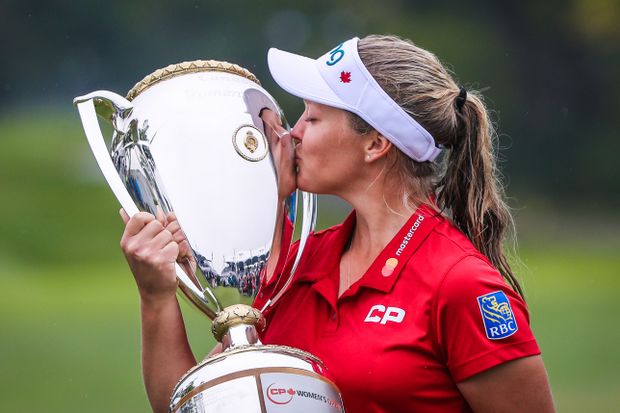 The accolades are pouring in from all over the golf world for Brooke Henderson after the 20-year old won the CP Canadian Women’s Open on Sunday.

The well-wishes range from hearty congratulations to wanting to name airports and holidays after her.

You might wonder, what’s the big deal? After all, Henderson has won six times previously on the LPGA, including a major championship and it’s not like she came out of nowhere. The media has been abuzz about the little girl from Smiths Falls since she was in elementary school.

The big deal, so to speak, is that it’s the first time in 45 years that a Canadian has won the Canadian Open. The feat was last accomplished on the LPGA by Jocelyne Bourassa in 1973 and on the men’s side, you have to look all the way back to 1954 when Pat Fletcher notched the national title.

In between, it’s been a long drought for national pride. Mike Weir came closest to breaking the jinx in 2004 when he took Vijay Singh to a playoff at Glen Abbey. David Hearn gave Canuck golf fans another jolt when he held the 54-hole lead in 2015 but like Weir, he ultimately came up short. On the women’s side, Lorie Kane came close in 2000 when she flirted with the lead at Royal Ottawa, when the DuMaurier Classic was still considered a major.

Despite the close calls and the annual reminders of our national frustration, there really haven’t been a lot of times that Canadians were even considered favourites to win the Canadian Open. So much for home field advantage.

That changed a couple of years back when Henderson forced her way onto the LPGA by winning the Cambia Portland Classic as an underage player and then quickly vaulted into the Tour’s top ranks. Now she’s on tournament billboards and program covers every week and it’s impossible to miss the Canadian kid with the blond ponytail and the bright smile.

But there’s still a lot of ground to cover between being a contender and being a champion.

Until last Sunday in Regina, 2018 had been a mixed year for Brooke. She won the Lotte Championship in April but missed the cut the following week. She withdrew from the U.S. Open in June after the death of one grandfather, then had more time off when her other grandfather passed away on August 5th.

Those losses must weigh heavily on Brooke and her sister Brittany, who caddies for her and her father Dave, who is her coach. Somehow, though, Brooke is able to draw strength from it too.

“I feel like once I get inside the ropes I can let that go. I know that my two grandpas, who did pass away, they’re always cheering me on and looking on from heaven.”

Perhaps the best sign that something good was to come in Regina was Brooke’s final round the week before in Indianapolis. A 63 on Sunday moved her into a tie for 7th and all parts of her game seemed to be working well.

She’s among the longest drivers on the LPGA Tour and that club has been gold for most of the year but when she’s struggled it has been with her scoring clubs – her wedges and putter. At the Indy event, she wedged it close on Sunday and made a few long bombs with her putter too.

At a press conference in Regina, Brooke acknowledged what that round meant to her.

“To see those putts go in and make birdies, shoot minus-nine, and finish strong on Sunday was really important to my confidence and my momentum coming into this week.”

If she wasn’t already the centre of attention at the Wascana Country Club, that 63 just added to the already amped up excitement level for Brooke and maybe added even more pressure for her to do well on home soil. Some players seem to handle all the attention easily, but Henderson is a bit overwhelmed by it.

“To see the billboards … I blush a little bit because I’m a little embarrassed,” Henderson said.

“It’s unreal because playing on the LPGA Tour every week is a dream come true. To come here where I’m the centre of the attention is a highlight and I will remember moments like this forever.”

While Brooke commanded most of the pre-tournament attention, she didn’t waste a lot of time taking control of the tournament either. A pair of 66’s was followed by 70 on Saturday and heading into the final round, Brooke held a one-stroke lead over American Angel Yin. Hopes for a national title were raised all over the country.

Golf analysts love to debate whether it’s easier to win protecting a lead or coming from behind. There’s no doubt that protecting a lead comes with added pressure. Some players try to play conservatively and let the chasers take all the chances while others say they want to continue to be aggressive, to do the same things that got them the lead in the first place.

Brooke Henderson is an aggressive player by nature and sometimes that has gotten her into trouble but, true to form last Sunday, she decided to play aggressive golf. There would be no backing into this title. When Yin ran off a string of three birdies on the back nine, Brooke answered with four of her own. Brooke’s 65 was the second-best round of the day and it nixed any chance of anybody catching her.

What she displayed on Sunday showed that when she’s on, she’s one of the best in the game.

Winning a national championship on home soil will always be a highlight of Brooke’s career and maybe there will be more Canadian titles yet to come but for now she can relish the victory, in what she considers the LPGA’s sixth major and the end of the Canadian Open jinx.

“It’s just amazing to be able to win this for all of Canada and for my family,” said Henderson. “I think it’ll take a little while to fully sink in. I’m the national champion, so it’s pretty cool.”